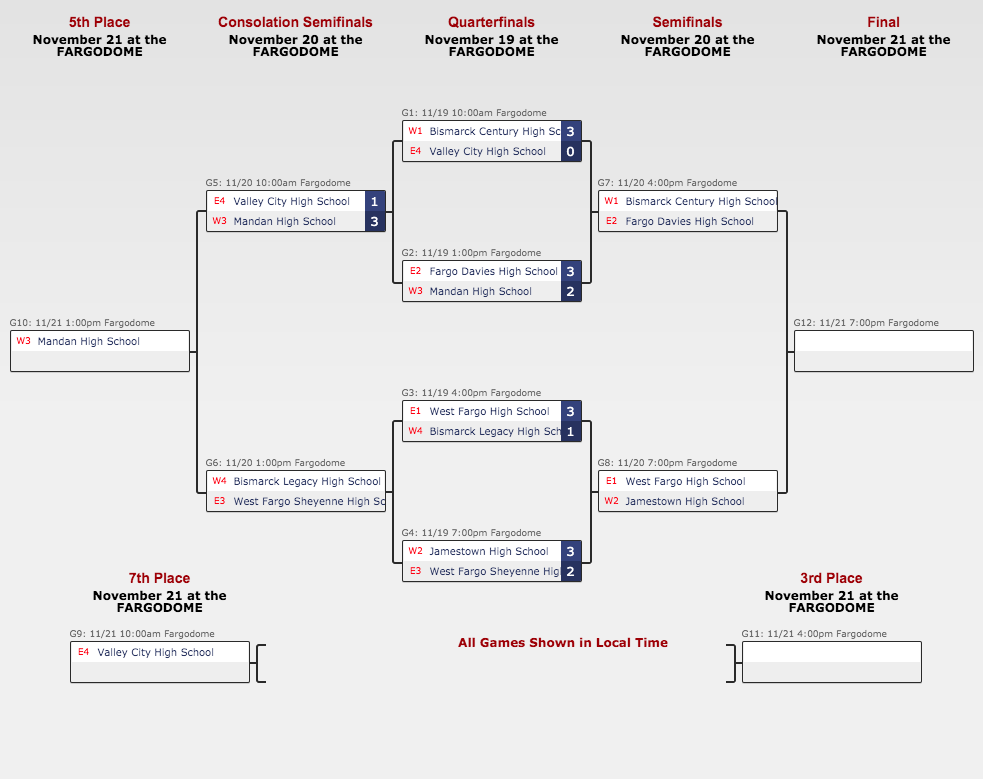 The Hi-Liners fell to W1 Bismarck Century in Thursday’s quarterfinals, and Mandan was defeated by E2 Fargo Davies.

The Braves came in hot, jumping ahead and maintaining their lead through the first set (25-19) and second set (25-16). Valley City had enough juice to take set three (20-15), and in the fourth, Valley City and Mandan stayed within one to two points of one another until the very end. After a few Valley City fumbles and Mandan’s momentum picking up, the lead was extended to four, Braves leading. They extended their lead even further when they pushed the score to 23-17—and then the Hi-Liner “Comeback Kids” kicked things into high gear. The Valley City ladies came up with some great defensive plays and were in system as they went on a 4-0 run against the Braves. They came back, but just not far enough. Their run ended with the score 23-21, and Mandan went on to score the next two to wrap up set four (25-21) and win the match 3-1.

Valley City’s blocking was effective and had Mandan struggling in sets three and four, and the ladies on the front line were swinging hard. Mandan’s defense compensated for a lot of Valley City’s attacks, and the momentum on both sides kept shifting. When the Braves had a couple of aces in the middle of set four, their attacks were more successful against the Hi-Liners, who started to scramble. Then, when the Hi-Liner block or kill put a point on Valley City’s side, the blue and white caught fire, playing organized, scrappy and smart.

Valley City now heads to the 7th place game against the loser of the Bismarck Legacy/West Fargo Sheyenne Consolation semifinal match. Mandan will play the winner in the 5th place game.

W1 Bismarck Century and E2 Fargo Davies semifinal starts at 4 p.m. Friday, and E1 West Fargo and W2 Jamestown play at 7 p.m. to determine who will get a shot at the state title.

Looking to move to Jamestown? Let us help you find a plac…