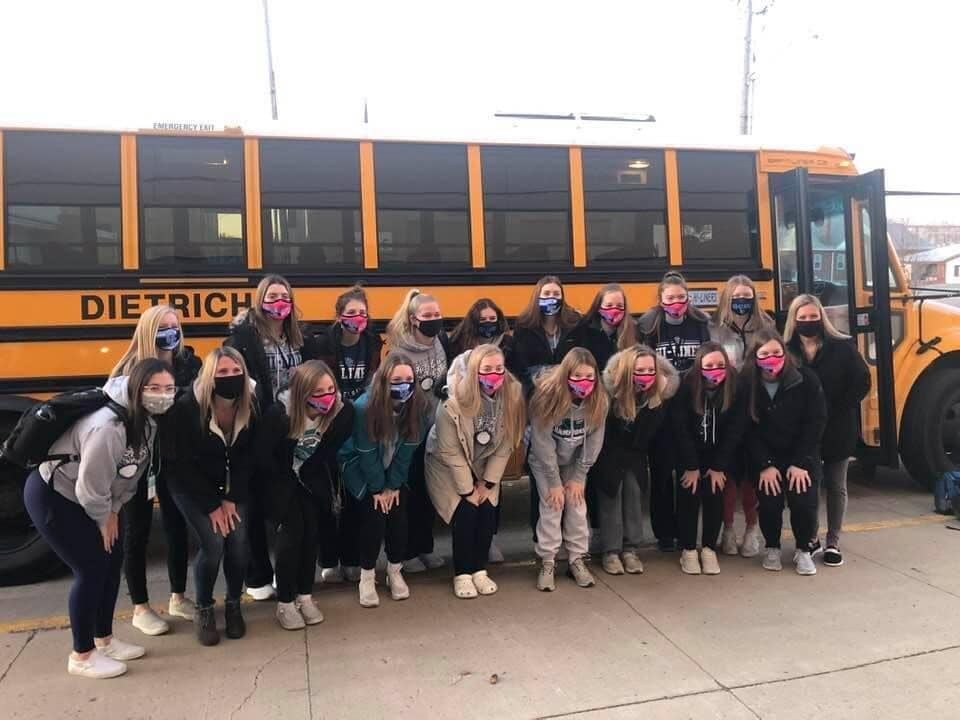 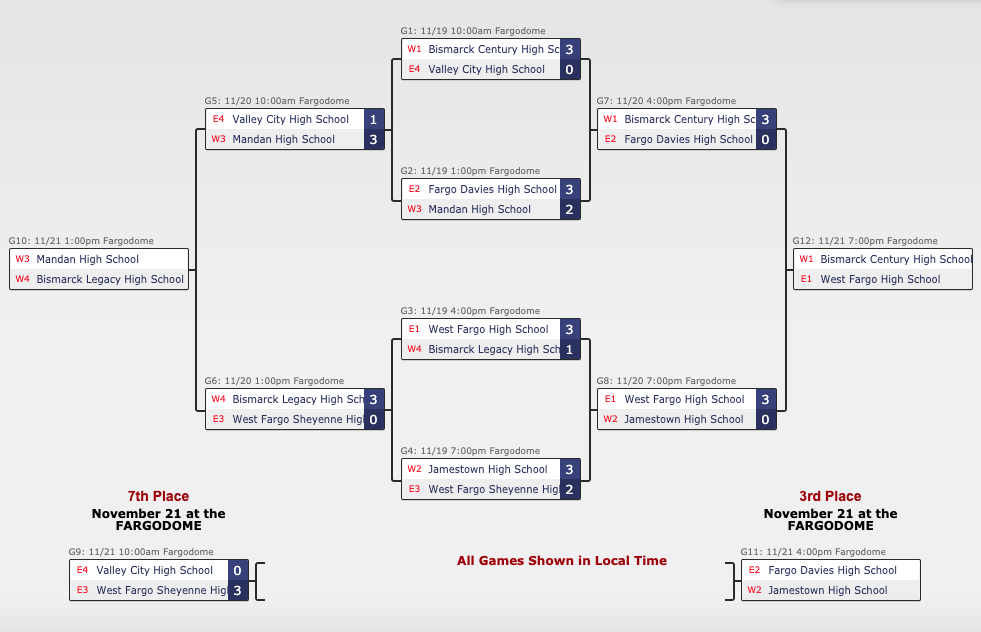 The Valley City Hi-Liners headed to their final game of the 2020 State Tournament when they played E3 West Fargo Sheyenne Mustangs in the 7th place game. In the first set, the Hi-Liners jumped to a 6-1 lead early as the Mustangs looked to be struggling on offense and defense. Valley City’s blocks were solid in halting the few setups that Sheyenne could muster, though they didn’t get many swings in early in set one. Valley City, on the other hand, had great, powerful swings. With the score 7-2, West Fargo got things together and went on a 3-0 run, two of them aces, to cut the Hi-Liner lead, who were ahead 8-6. Valley City continued to work their offense, switching it up to try and catch the Mustangs off guard, and they were up 14-10 again by mid-set. The Mustangs got things going with a few powerful kills and some Valley City struggles, and they tied the score 16-16 before going on a run to lead 20-17. As their nickname “Comeback Kids” indicates, the Hi-Liners mustered the strength to rally near the end of the set. On a 4-0 run, Valley City tied it up 21-21, but that’s as far as it would go. Sheyenne Plowed ahead and took set one 25-21.

As they did in set one, the Hi-Liners were the first to post a lead in set two. After achieving a three-point lead at 5-2, Valley City’s defense struggled against the Mustangs, who came back fast. The score was tied at 7-7, but the Hi-Liners continued to answer the Mustang’s points, tying things again at 9-9. The blocks and kills the Hi-Liners have had behind their success this season kept them in step with Sheyenne, and the score was tied again at 14-14. At that point, the Mustangs went on a 6-0 run, quickly jumping to 21-15. Like the end of set one, the Hi-Liners had a spark and pushed on—heading three points forward. They got within three, but West Fargo scored the final points they needed, taking the set 25-0.

West Fargo scored the first two of set three, though Valley City was right behind—and sometimes a point ahead—of the East Region’s #2 team. The pace of the game was faster than in the other sets, and Valley City’s players had some looking tired and low-energy. They fought to remain near the Mustangs’ lead. Their offenses went back and forth, scoring on kills, long shots, service errors. Mid-set, Hi-Liners trailed 18-14. Valley City struggled to get in system, as Sheyenne was organized and powerful. When the Mustangs were ahead 20-15, the Comeback Kids came back and scored three unanswered points. Sheyenne answered by scoring one of their own, and Valley City did the same. It was 23-23 after a Lexi Leroux ace, and looking a lot like the Hi-Liners were pushing for a fourth set. The Hi-Liners took the lead 24-23, only for the Mustangs to tie things up at 24. Peyton Pederson’s big swing put the blue and white up again, 25-24, matched by Sheyenne to tie it at 25. After the Mustangs scored point 26, they came up with the one point they needed, taking set three 27-25 and winning the game 3-0. The Mustangs took 7th place in the 2020 State Tournament and Valley City ended their season #8 in the state.

After Jamestown and Fargo Davies fell in the semifinal round, they headed to the 4 p.m. Saturday game. Davies swept the Blue Jays 3-1, earning the 3rd place crown as Jamestown took 4th.

Saturday's Championship game was between W1 Bismarck Century and E1 West Fargo, the latter making their first appearance in the title game since 2007. The Patriots came away with a 3-1 win, taking their sixth state title in the last 10 years.

Looking to move to Jamestown? Let us help you find a plac…